What is Data Science?

I've been somewhat obsessed with this question for years now. In this post I outline my views, as well as the semi-consensus view being adopted here at UC San Diego.

As someone who's held the job title of Data Scientist, who teaches Data Science classes, and who is a Founding Faculty member of the Data Science Major and the new Data Science Institute, I take very seriously the idea that Data Science can and should be an independent, novel field of scientific inquiry. And that it will be a massively important one at that. My musings on this recently came to a head with the release of a White Paper I helped write for the UC San Diego Division of Social Sciences (detailed below).

Most critically, I am strongly of the opinion that Data Science does not just equal Machine Learning. This is an opinion I expound on below, but is nicely summarized by friend Josh Wills, Data Engineer at Slack:


Rule #2 of Hiring Data Scientists: You can get a data scientist to do anything if they believe that what they are doing is machine learning.


There's a confluence of a lot of Data Science things happening at UCSD right now that make this document timely: When I first arrived at UCSD in 2014, there was not a lot happening here in Data Science. So I decided to teach a class —(COGS 9) Introduction to Data Science; I had about 24 students. It was the first-ever class I taught as a professor and the students of that class went on to found the UCSD Data Science Student Society (DS3).

The demand for the theory and skills of Data Science is skyrocketing, which I joke about in my lectures:

But joking aside, there are serious concerns that Data Science is a fad. This is Very Bad News when one is trying to establish a new major, Institute, and potentially even field!

Personally I'm of the opinion that Data Science is simply plummeting toward the hype cycle Trough of Disillusionment: 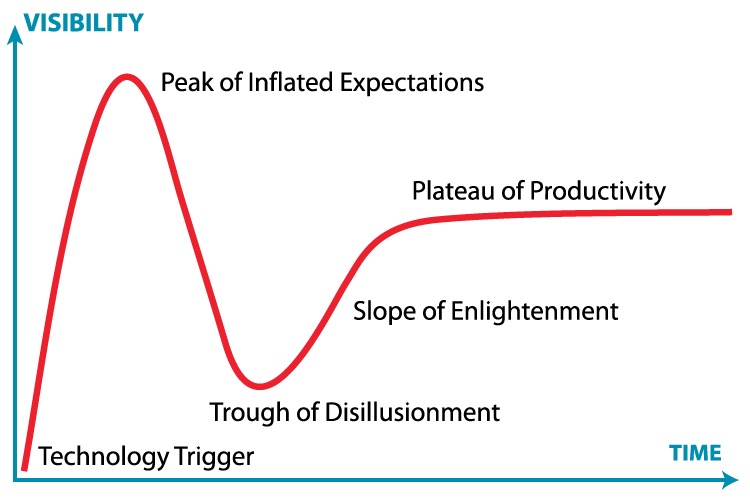 I consider this to be a good thing, as it's a time for moving past the hype and doing the boring academic work of carving a niche and laying the foundations for a new field. (See also, 50 years of Data Science by David Donoho.)

When I first began conceiving of Data Science as an independent field of scientific inquiry, I saw that New York University’s Initiative in Data Science website has a “What is Data Science?” page, on which it is stated that:

There is much debate among scholars and practitioners about what data science is, and what it isn’t. Does it deal only with big data? What constitutes big data? Is data science really that new? How is it different from statistics and analytics?


I believe that this ambiguity about the scope, aims, and distinctive characteristics of a Data Science discipline has (correctly!) given rise to skepticism.

But honestly, this skepticism strikes me as reminiscent of criticisms of Computer Science as a distinct discipline back in the 1950s, with some decrying it as “impossible that computers themselves could actually be a scientific field of study”.

I believe that the skepticism of Data Science is similarly misplaced, albeit understandable given the lack of clarity as to what Data Science is, what it can be, and what scientific and social problems are unique to the modern proliferation of massive amounts of contextual and personal data.

To address the general lack of clarity, we wrote a White Paper laying out what we believe are the core establishing questions that define Data Science, and lay the groundwork for what it can and should be. I recommend you read the whole thing (I'm proud of it!) but will highlight pieces here.

Foundational Questions in Data Science Those first questions regarding how much data and of what quality are needed to address which kinds of problems strike me as very similar to Big O algorithm analysis in computer science, with a lot of interesting problems embedded in it.

For a somewhat trite example, why does Google Translate work as well as it does without any hard-coded information about grammar, semantics, linguistics, etc.? (See The Unreasonable Effectiveness of Data by Halevy, Norvig, and Pereira).

There is a lot of room here for uniquely Data Scientific questions that do not neatly fit into Computer Science, Statistics, or the Social Sciences.

Regarding the latter, there are also many Data Scientific questions highly relevant to the Social Sciences.

In our White Paper we outline four paths within the new Data Science Major and Institute:

Data Engineering: The development of data architectures, algorithms, systems, etc. for capturing, storing and processing an exponentially increasing torrent of data. In industry, holders of jobs with this title are often tasked with establishing the data infrastructure necessary to make analytics and machine learning feasible.

Machine Learning and its Foundations: The mathematical and algorithmic tools for learning from data and their theoretical foundations, including questions such as which problems are more or less amenable to general purpose data-driven approaches, what are the sample, memory, time complexities of specific problems, inter alia.

Social Science Oriented Analytics: Although some AI/ML applications can be entirely machine-centered (a control system for a quadrocopter), most of Data Science aims to generate usable insights for humans about human behavior. Here the focus is on understanding how data science tools can be adapted to answer social science questions, how social science processes generate data and what this means for their analysis, how the results of large-scale machine learning can be made useful/understandable to people, how to seamlessly integrate human intelligence with machine learning in expert systems and for crowd-sourcing applications, and how expert knowledge interacts with machine learning approaches.

Data and Society: Beyond being a tool, Data Science itself should be an object of social science investigation. There is a need to bring cutting-edge research and applications in data science in conversation with democratic legal frameworks as well as forms of social analysis that examine how values get designed into technical systems. How can we develop provably anonymous data gathering and reporting strategies, balance the need for privacy with the demand for data, incorporate fairness and accountability into algorithms, and counter statistical/algorithmic discrimination to prevent data-driven approaches from perpetuating and reinforcing inequities? More broadly, we need to understand the social ethics required for a society where data science applications are pervasive.

Finally, we close with what we believe are critical paths to success:

Advancing Data Science as a distinct field of scientific inquiry and engineering, unifying faculty across many departments and divisions.

Improving data science education at the undergraduate, graduate, and faculty levels. Pursuing civic and social good through outreach and community involvement. This is an incredibly ambitious, but sincerely exciting effort. UC San Diego is poised to become a true founding leader in Data Science, just as it was with Cognitive Science in the 1980s.

But this is not a lone effort, and I would very much love to hear feedback from academics, professionals, and anyone else on the future of Data Science both here at UCSD and more broadly.