In my last post I outlined how and why I taught my Data Science in Practice (Cognitive Science 108) class here at UC San Diego. The sole purpose of this post is to show off the incredible talent of my students and to showcase the work they put into their Final Projects. The purpose of the project was to find real-world problems and datasets that can be analyzed with the techniques learned in class. Here are the instructions I gave the students:

It is imperative that by doing so you believe extra information will be gained – that you believe you can discover something new! Your question could be just for fun ( e.g. , “What are commonly misheard song lyrics?”), scientific (e.g., “How do different cultures perceive different colors?”), or, ideally, aimed at civic or social good (e.g., “What parts of San Diego are most in need of dedicated bike lanes?”)

Edit: The rationale behind why I chose to have the students put together a Final Project like this was so that they could build a Data Science portfolio to show off their skills. Data Science is multifaceted, and requires programming, statistics, data visualization, communication, information aggregation, and so on. When I was recruiting for Data Science positions back in my industry days, students with a portfolio of projects absolutely jumped out at us. In addition, for this first offering group had the option of submitting their projects early in order to participate in a special judging panel lead by former (and first) US Chief Data Scientist and friend, DJ Patil (twitter, wikipedia). DJ is a UC San Diego alumnus (Math, 1996) and happened to be in town the weekend before finals week to receive an Honored Alumni Award from the Chancellor. (You can also watch an interview I did with DJ that weekend below.) While he was in town, he agreed to watch eight of the best groups each give a 5-minute presentation on their final projects. To be considered for this challenge, the following rules needed to be followed: Based on these simple criteria, the panel selected the top three projects. In addition to DJ, the panel included Brandon Freeman (UC San Diego Alumni Board of Directors and Leidos Engineering Solutions Architect), Arnaud Vedy (Data Analytics, City of San Diego), and Liz Izhikevich (UC San Diego Computer Science undergrad, President and Co-founder of the UC San Diego Data Science Student Society, and Voyteklab star!) You'll note in many of the below notebooks the students make sometimes rudimentary statistical, logical, and/or visualization errors. That's okay! Those are learning experiences... and they learned a lot in the short 10 weeks we have in each quarter. Without further ado, here are the eight finalists: First Place "The Road to DJ Patil is Filled with a Multitude of Potholes" Lee Anne Mercado, Maggie Chan, Tim Lee, Vinh Doan, Young Jin Yun The panel unanimously agreed that this project—which took a data-driven approached to understand how San Diego should allocate their pothole workers and resources—was strongest in adhering to the spirit of the competition: they took a problem relevant to civic good and, through diligent and careful data analysis, came to some actionable conclusions. Second Place GPA Distributions Diego Saldonid, Roger Ruan, Shu-Wei (Lucas) Hsu, James Mata This group's project was well-loved by us all. The primary reason it didn't win first place was because it wasn't quite as closely related to the civic/social good focus of the competition. Nevertheless it is super interesting. In brief, the students scraped class reports from UC San Diego's Course And Professor Evaluations (CAPE) website to look at how average grades differ across different professors teaching the same classes at different quarters. They then look at how grades might differ between an average student who has a "harder grader" path versus an average student who takes the same classes with with an "easier grader". Amazingly they find it can be almost and entire grade point different: 2.49 v 3.42 overall GPA! Third Place Transportation Infrastructure Hudson Cooper, Vlad Bakhurinskiy, Muhammad Islam, Marco Rivera, Wenshuo Li This group begins by asking: "Can we quantify the quality of life with just a point on the map?" This group really took my advice to heart and pulled in data from several different resources to "try to measure the ‘liveability’ of a neighborhood by looking at different aspects of the availability of methods of transportation rather than just more metrics such as an individual's level of education or income." This was a beautiful project with serious civic infrastructure implications. While they focus on San Diego, their methods are easily replicable across different cities. Do yourself a favor and look at their entire analysis notebook. 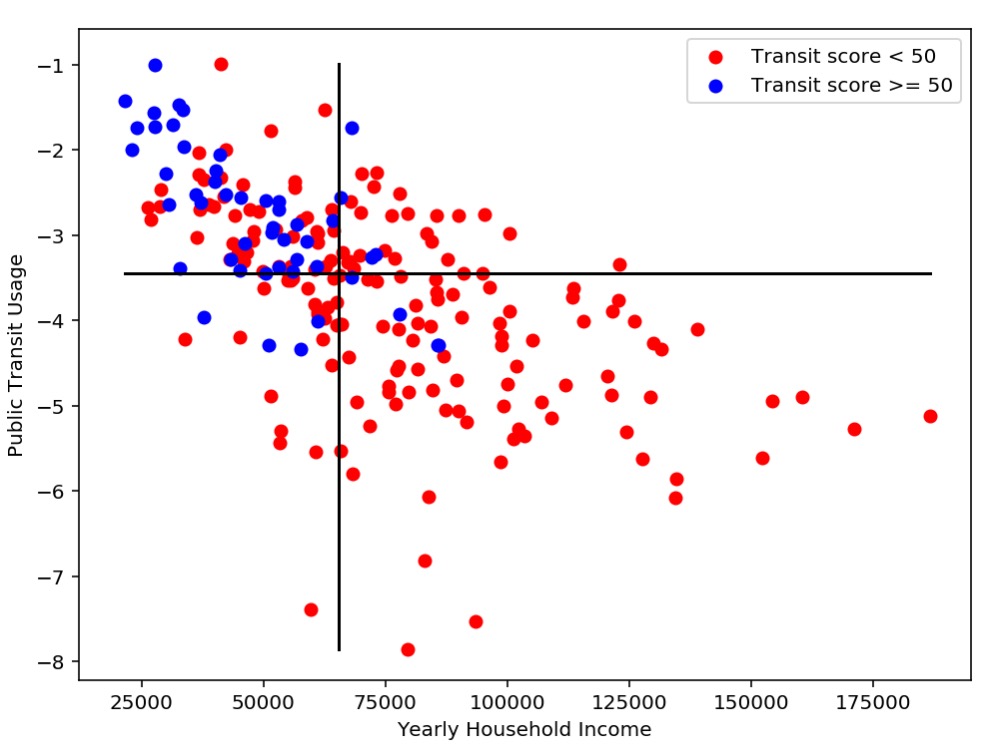 I wish I had the time here to expound the virtues of each of the below projects in detail, sadly I do not. But please do not take my lack of detailed comments as an unspoken commentary on the amazingness of their work. Please do take the time to look at each of these, as they are truly remarkable!

Patil says smart words whilst seated next to me: